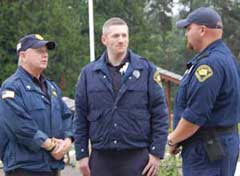 Local 117’s legal team has succeeded in securing an additional day of annual leave for Teamsters at the DOC whose rights were violated in an arbitration case involving personal holidays.

Local 117 challenged the Department’s practice and ultimately achieved an arbitration ruling in the Union’s favor that prevents the DOC from denying personal holiday requests based on a lack of available relief.

This is a great win for Teamsters at the DOC. It demonstrates the strength of your collective bargaining agreement and it shows that your Union will vigorously defend your rights when they are violated.