DOC Gears Up for Day of Action on January 10! 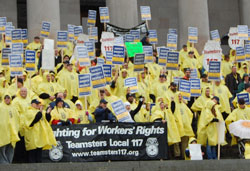 FOR INFORMATION ABOUT THE DAY OF ACTION EVENT INCLUDING PARKING, TRANSPORTATION ETC., CLICK HERE!

In December 2010, over 300 Teamster correctional employees and their supporters surrounded the State Capitol in Olympia.

Draped in yellow ponchos, the officers, sergeants, cooks, nurses, and maintenance and office workers who staff our State’s prisons, chanted in unison:

“Who are we? DOC!” and “What do we want? Safety! When do we want it? Now!” DOC staff was joined at the rally by dozens of Local 117 members from other industries.

Together, the Teamster voices echoed through the legislative halls and chambers, and representatives took note.

After cutting over $220 million from the Corrections budget and closing three prisons, the Legislature passed a prison safety bill (SB5907) in 2010. The bill mandated statewide safety committees and put OC pepper spray into the hands of some line staff. It was a step in the right direction.

“Too many of us have been hurt,” says Eric Smith, a 16-year Shop Steward with the Washington Corrections Center in Shelton. The stress of the job takes an immeasurable toll on correctional workers and their families.

Despite the well-documented stress and dangers of the job, the State demonstrated once again during this year’s collective bargaining process that it does not respect its employees.

“By refusing to recognize the unique work that correctional employees perform and by ignoring safety issues in bargaining, the State is not only showing disrespect, it is breaking the law,” said Tracey A. Thompson, Local 117 Secretary-Treasurer.

THE PUSH FOR INTEREST ARBITRATION

Thompson maintains that the only way substantive change can occur at the DOC is if the Legislature passes interest arbitration legislation for correctional workers. With interest arbitration, the State cannot simply refuse to bargain over wages, hours, or working conditions without consequence.

If the State and the Union cannot reach agreement through contract negotiations on mandatory subjects of bargaining, then your Union would have the right to bring its proposals to a neutral arbitrator. The State Patrol, firefighters, County Corrections and other public safety professionals have been granted broad interest arbitration rights. It’s time for our State’s correctional employees to be afforded that right as well.

JOIN US ON JANUARY 10 IN OLYMPIA!

In their fight for interest arbitration rights, correctional employees are poised to march on the State Capitol again, and they are calling on all concerned citizens for their support.

You can support Correctional Employees by: