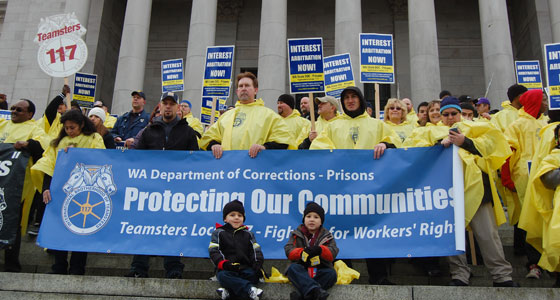 On Friday, April 19, your Local Union’s Secretary-Treasurer Tracey A. Thompson resolved the pending bad faith bargaining Unfair Labor Practice charge against the State and signed a Memorandum of Understanding (MOU) that secures full interest arbitration rights during the term of your 2013-2015 collective bargaining agreement.

This MOU represents a significant victory for all Teamsters Local 117 correctional employees. It recognizes the critical nature of corrections’ work, and it honors the men and women who staff our State’s prisons who put their lives on the line every day to keep our communities safe.

If the Department of Corrections and the Union cannot reach agreement on mandatory subjects of bargaining, your Union will now have the right to bring its proposals to a neutral arbitrator, who will make a final ruling that will be binding to both parties. This change will be effective from July 1, 2013 through June 30, 2015.

The fight for interest arbitration for DOC Teamsters began three years ago and culminated in a powerful Day of Action! event on December 10, 2012, when hundreds of correctional employees and their supporters gathered on the Capitol steps in Olympia.

The primary vehicle for interest arbitration this legislative session was HB1490. At the beginning of session, the bill had momentum, but eventually stalled in committee. When the prospects for passing HB1490 began to dim, Local 117 Secretary-Treasurer Tracey A. Thompson and President John Scearcy met with Governor Inslee.

At that meeting, your Union’s leadership discussed the unique challenges of working in a prison environment and the significance of interest arbitration for correctional employees. Your leadership also described for the Governor what occurred in contract negotiations last fall that resulted in an Unfair Labor Practice charge against the State.

The Governor was receptive to our concerns and expressed a deep commitment to the well-being of the State’s prison employees.

Shortly after the meeting, Governor Inslee directed OFM to begin drafting an MOU that incorporated the interest arbitration provisions your Union sought in HB1490.

The MOU secures interest arbitration rights for Teamster correctional employees through June 30, 2015 and requires the State to provide notice to the Union of any change in a mandatory subject of bargaining. For negotiations over your 2015-2017 collective bargaining agreement, the Union and the State will select an arbitrator prior to negotiations that will be used only if the parties reach impasse.

Your Union’s leadership will be meeting with members this summer at all of the institutions across the State to discuss your new interest arbitration rights and your entire 2013-2015 collective bargaining agreement.

Congratulations to all Washington State correctional employees for your tremendous work in achieving this significant victory. For a list of FAQs about interest arbitration, click here.